Welcome. We see you.

Our vision is a trauma-informed, evidence-based legal system that sees, listens and protects you and your children, keeping you safe, peaceful and thriving.
JOIN THE ADVOCACY COMMUNITY
DONATE TO OUR ADVOCACY CAMPAIGN
PRESS RELEASES

IT'S TIME TO UNITE.
​LEARN MORE ABOUT OUR ONGOING ADVOCACY CAMPAIGNS

Custody Peace, One Mom's Battle, Movement of Mothers and 1000's of advocates from around the globe have joined forces around the movement to build awareness and advocacy for policy change that will positively impact the current Family Court System worldwide. Sign up to learn how you can advocate for ​evidence-based policy change that will ensure child safety is the top priority in custody cases and that everyone is free from coercive control and post separation abuse. ​
JOIN THE ADVOCACY COMMUNITY 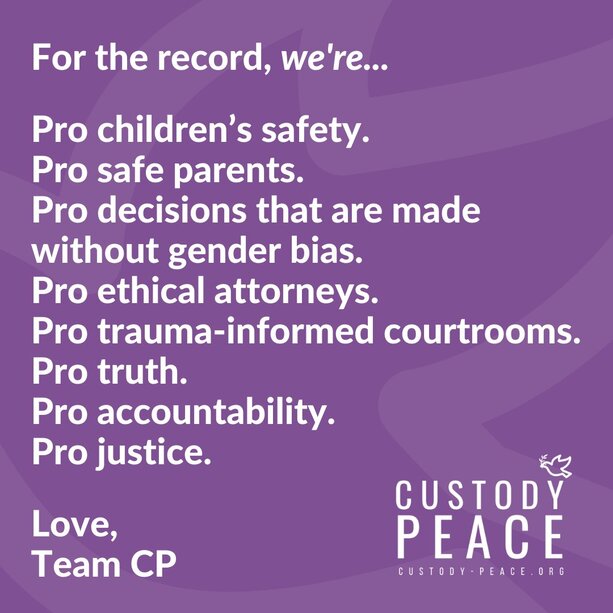 It's time for solidarity. It's time to come together and advocate for evidence-based policy that prioritizes child safety in all custody cases and frees everyone from all forms of post-separation abuse and coercive control.

Throughout the world, unhealthy parents are using family court systems and their children to continue post-separation abuse with a severe lack of accountability — and safe parents (statistically, mostly mothers) are being punished (even losing custody) in their attempts to protect themselves & their children from abuse.

The current family court system in the United States is failing our children by routinely awarding custody to the abusive parent in cases where abuse is present. Tens of thousands of children per year continue to be court-ordered into unsupervised visitation with their abuser and are, therefore, at risk.

While this issue impacts parents of all genders, current research  proves that safe mothers are losing custody disproportionately, often by as much as 73-81% of the time. Due to this disparity, our advocacy efforts are primarily focused on safe mothers in order to have the most significant impact on the family court system; however, our efforts aim to provide protection and justice for safe parents of every gender and their children. We hope that all of those who value healthy outcomes for our children will stand with us in this movement.
​

Through the cultivation of community, awareness building & advocacy our mission is to establish child safety as the top priority in all custody cases and ensure freedom from coercive control & post-separation abuse through legal and cultural accountability worldwide.

We envision a research-led and trauma-informed family court system that acts with urgency and without gender bias to protect children from abuse while ensuring accountability and enforcement of human rights, specifically:


Imagine peace, well-being and health for you and your children. This is our goal.
​

“A global awakening is underway; as perpetrators’ courtroom strategies and poor parenting choices come under the spotlight, a seismic shift from victim-blaming to accountability will hopefully follow.” - Rachel Watson

We’re taking a look at some of the most positive Family Court reform news stories from 2021 that give us hope for the future starting, with Angelina Jolie joining advocacy efforts for Family Court Reform.

Ms. Jolie is pushing Congress to renew the Violence Against Women Act (VAWA) and, to incorporate Kayden’s Law into VAWA. "Jolie is specifically advocating for VAWA to include “Kayden’s Law” which is centered on trauma-informed court processes that minimize the risk of harm to children, judicial training and qualifications of custody evaluators." - Politico
​
Keep READING ON MEDIUM

CUSTODY PEACE IS PROUD TO BE A HOST PARTNER OF THE ALLEN V. FARROW PANEL SERIES.

We continue to be a proud host partner of this impactful discussion series! — The Center for Judicial Excellence, in partnership with RAINN and Jane Doe Films invites you to "Allen v. Farrow & Family Courts," a virtual panel discussion. This discussion will focus on the need for improving child protection in family courts through legislation at both the state and federal levels, featuring panelists:

Participate in a New Research Study on Post-Separation Abuse

Systems of power and abuse: The exploitation of legal systems as a function of escalating post-separation abuse among individuals with high conflict partners.
LEARN MORE

Use Your Voice: As a protective parent, you can help this movement to end the family court crisis, by filling out this survey to allow for published data from Alliant International University and Institute on Violence, Abuse and Trauma. Your story matters and a collective of your stories is strong evidence for needed reform. (Shared via California Protective Parents Association).
COMPLETE THE SURVEY

Post-separation abuse does not just affect the victim, it has both immediate and long-lasting effects on children resulting in high adverse childhood experiences (ACEs). ACE’s, a term used to describe any traumatic event during childhood such as divorce, violence, emotional abuse, neglect, substance abuse or even an environment that undermines a child’s sense of bonding or stability. The ACE Study (The Center for Disease Control and Kaiser Permanente) should be the courtroom bible for judges and other family court professionals who are tasked with the responsibility of acting in the best interest of children.

While there are many resources available to victims of DV during the relationship, the only resource available to victims of post separation abuse is the family court system itself (judges, mediators, minor’s counsel, custody evaluators, therapists, co-parenting counselors, parenting coordinators and attorneys). It is so important for those in the family court system to be educated on post-separation abuse and to recognize it in high-conflict divorces, custody battles and paternity cases. (Source: One Mom's Battle)
​
LEARN MORE

Lumping in a protective, safe parent with a high-conflict personality and defining the case as "high-conflict" can lead to dangerous outcomes and perpetuate the ongoing abuse of protective parents and their children. These cases are not "high conflict," they are the perpetuation of post-separation abuse at the hands of an unsafe parent and taxpayers are funding the abuse of children and their parents. It's that simple.
​
"'High conflict' approaches mean courts immediately assume fathers (but not mothers) are acting in good faith instead of waiting for the evidence to make this determination. The courts assume the goal is co-parenting and judge parents on their willingness to cooperate. Abusers seek custody to regain access to their victim and are happy to seek shared parenting as a first step to gaining full control." ​

"Mothers’ attempts to protect their child, as any good parent would do are viewed as an obstacle to the co-parenting arrangement the court is promoting. This goal benefits courts trying to control overcrowded dockets, but is harmful to the children. ACE (Adverse Childhood Experiences) research informs us that contested custody is often the last chance to save children from a lifetime of misery, but few courts are considering this research even though it comes from the Centers for Disease Control and Prevention and is taught by the National Council of Juvenile and Family Court Judges.

It's time to redesign the system.
​​
LEARN MORE

"Family law attorneys and judges alike would benefit from thoughtful education aimed at deepening their understanding of personality disorders and learning effective ways to communicate and work with such individuals."

While most divorce cases are settled out-of-court in less than two years, high-conflict cases typically last two to five years and can involve scores of filings, endless delays, tens and hundreds of thousands of dollars in legal fees, and a high rate of attorney turnover. Worst of all, children become collateral damage and often wind up developing a wide range of mental-health issues (see ACEs).

​This empirical study focuses on family law cases that involve a litigant with a personality disorder and that drag on for years despite reasonable options for resolution. Informed by the relatively sparse literature on high-conflict personalities in the family law system, Professor Oberman and her co-authors interviewed experienced family law practitioners, family law judges, and a seasoned custody evaluator with the goal of increasing knowledge about the harms associated with high-conflict personalities in the family law system, the forces that perpetuate these protracted disputes, and possible means to ameliorate the problem. Professor Oberman and her colleagues report on the major themes that emerged from their interviews with family law experts and propose a series of reforms suggested by these findings.
​
“The optimal means for resolving these cases lies in recognizing that the high-conflict party is drawn to the conflict, rather than to settlement, and devising effective means of disengaging and de-escalating the dispute.” To that end, “family law attorneys and judges alike would benefit from thoughtful education aimed at deepening their understanding of personality disorders and learning effective ways to communicate and work with such individuals.”
​
READ THE SANTA CLARA STUDY
UNDERSTANDING HIGH-CONFLICT PERSONALITIES & CUSTODY CASES

Adverse Childhood Experiences (ACEs) have a tremendous impact on future violence victimization and perpetration, and lifelong health and opportunity. Working together, we can help create neighborhoods, communities, and a world in which every child can thrive. Learn more about preventing ACEs in your community by assuring safe, stable, nurturing relationships and environments.
learn how to prevent aces
FAMILY COURT can prevent ACEs - Read more

"Perhaps the most archaic & dangerous of all these systems is our family court system. No other system can order a child to live with the abuser they just fled or bankrupt the victim-survivor trying to protect them." - Jess Hill, The Trap

Content warning: domestic abuse and violence. Domestic abuse is not just something that happens to other people—it is the story of all of us. But before we can fix it, we need to see it for what it really is. We have to understand The Trap. We know what domestic abuse is and where it lives—so what power do we all have to end the trap?